Enrollment » Why Attend Our Schools?

Why Attend Our Schools?

Top 8 Reasons to send your child to

Reason Number 1: the odds of having a good job are better with a college degree

At College Achieve, we believe all of our students are college material. We believe your child should have every opportunity to become a college graduate, and we will prepare them for the rigors of college. Why is this important?

College graduates make more money, have dramatically higher rates of employment, and have a greater say in their career choices. Watch students from College Achieve Founder's first charter schools in Los Angeles tell you about their college aspirations.  This public service announcement appeared during 2009 Rose Bowl and was watched by over 20 million viewers around the world! 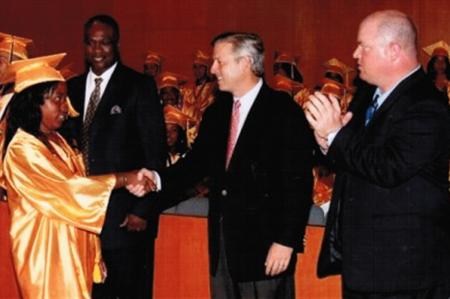 Also see article in NY Times, "Life is Okay if you went to College."

According to the National Center on Educational Statistics, the average school year in New Jersey (and
nationally) is composed of 6.6 hour days, 33 hours weeks, and 1,201 hours of instruction for the entire year.[1]

At College Achieve Central, the average day will be 7.9 hours long, 39.5 hours a week, and 1,422 hours a years. This amounts to over 6.7 weeks of additional instruction or 33 additional school days.  In addition to the 1,422 hours of instruction per year during the regular school day, College Achieve Central will also provide after school programs and other educational programs, such as summer education. Theses supplemental programs provide additional instructional hours, possibly well over 175 hours. These instructional hours can surpass an astonishing 1,600 hours.

Reason Number 3: Rigorous Hiring Process leads to better teachers The secret to a great school is to ensure a great teacher in every classroom.  College Achieve believes, "you are who you hire."  College Achieve plans to hire great teachers who have a proven track record of success in the classroom.  New teachers must first serve an apprenticeship before getting their own classroom.  In most classrooms, there will be two certified classroom teachers - proven teacher and an apprentice teacher.  No teacher will be hired without the Principal or a senior leader first observing the teacher teach in their current classroom.

Reason Number 4: Our leadership has a proven track record of success Founder Michael Piscal has a track record of starting and operating high performing schools: NY Daily News  September 12, 2010
​Consisting of 15 schools in a once academically blighted area of south Los Angeles and with an 88% African American enrollment, ICEF has done what we are always told is impossible. [If you combine the reading scores of all five ICEF elementary schools, system wide ICEF has] eliminated the achievement gap in reading for its African American students. Eliminated it. That fact alone should cause the Department of Education to send a team of researchers to ICEF this afternoon and to keep them there until they learn what Mike's doing.  To add a little sizzle to the steak: one of his elementary campuses - View Park Prep, which has a 100% African-American student body - just beat the reading scores of Beverly Hills Unified. Of his five graduating classes of high school seniors, 99% have been accepted to college, and an astounding 91% are still enrolled in college full-time. Operating on the tiniest budget imaginable - about $1,700 less per student than the L.A. public schools, in a state that ranks 46th in the nation in education funding - Mike has created a 15-campus testament to the maxim of Theodore Sizer: "The highest compliment you can pay a child is to be demanding."

The demand for more educational choice in predominantly minority South Los Angeles is pronounced. The waitlist for existing ICEF schools has at times exceeded 6,000 kids. And no wonder. Like KIPP, Green Dot and other charter school networks that aren't constrained by union rules on staffing and curriculum, ICEF has an excellent track record, particularly with black and Hispanic students. In reading and math tests, ICEF charters regularly outperform surrounding traditional public schools as well as other Los Angeles public schools.

ICEF has been operating since 1994, and its flagship school has now graduated two classes, with 100% of the students accepted to college. By contrast, a state study released in July reported that one in three students in the L.A. public school system -- including 42% of black students -- quits before graduating, a number that has grown by 80% in the past five years.

College Achieve Central Charter School is located on the beautiful grounds of the former St. Bernard's Elementary School.  We have an incredible campus with 16 large classrooms, a library, gym, and large cafeteria.  And we are only two blocks from Milt Campbell Field - an amazing public park.

Reason Number 7: We will duplicate the incredible programs Mike Piscal pioneered at ICEF Public Schools such as International Travel Programs for Music, Rugby, and our SOAL Program (Summer Of A Lifetime).

Reason Number 8:  Students from charter schools founded and operated by Michael Piscal currently attend or have graduated from the following colleges and universities: